The Indo-European language family includes most modern European, Anatolian, Iranian and South Asian, having its roots in a “proto-Indo-European” culture that existed in Central Asia and Eastern Europe around the 5thand 4thmillennia B.C. before they spread eastwards and westwards, carrying with them a warlike ideology and a pantheon dominated by male sky-gods. By the 2ndmillennium B.C. they had come to dominate Northern India, Western Europe, Anatolia and the Aegean. Some archaeologists have suggested that these were the same people who gradually overthrew the more peaceful and egalitarian goddess-worshipping Neolithic and Megalithic cultures.

The Indo-European connection is the historical background for the many similarities etween Old Indian myths of the Vedas and Old Norse myths and the Eddas.

From about 2500 B.C., a new, agricultural people arrived in Scandinavia from the Southeast. If the earlier settlers had not been Indo-European, these new…

An exhibition opened at Stonehenge on Friday, showing the remarkable similarities between prehistoric cultures in Britain and Japan. The exhibition features over 80 Japanese artifacts, none of which have been displayed in Britain before, including a 5,000-year-old Jomon Flame Pot, according to English Heritage, the body which cares for Stonehenge. Miyao Toru, the curator at […] 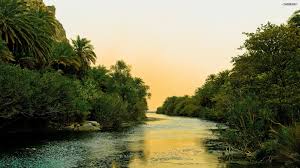 The Lost Rivers of the Garden of Eden

The quest for pinpointing the exact location of the Biblical Garden of Eden and the four rivers almost rivals the quest for the location of fabled Atlantis. And the theories that abound are almost as numerous as the interpretations of the seven days of Genesis. Before tackling this question let’s review what is written in Genesis about the four rivers:

And a river went out of Eden to water the garden; and from thence it was parted, and became into four heads. The name of the first is Pison: that is it which compasseth the whole land of Havilah, where there is gold; And the gold of that land is good: there is bdellium and the onyx stone. And the name of the second river is Gihon: the same is it that compasseth the whole land of Ethiopia. And the name…

This depiction of Jerusalem comes from Bernard von Breydenbach’s Itinerarium Terrae Sanctae (Itinerary of the Holy Land). This edition is probably from 1502. The engraver of the print is unknown. Image copyright the Dean and Chapter of Worcester Cathedral (UK).

A piece on this blog from 2014, which discussed Worcester Cathedral Library’s 16th and 17th century books containing Hebrew scripture, briefly mentioned the importance of Jerusalem to the Christian, Jewish and Islamic worlds. It contained a picture from a medieval manuscript which presented the city in an idealised, non-topographically accurate form.

A medieval depiction of Jerusalem. With thanks to Konstanze Kupski for the original article and for finding this picture. Image copyright the Dean and Chapter of Worcester Cathedral (UK).

Last September, I explored the development of world maps in the Early Modern period, looking at how the perceptions and depictions of the world changed over time. In this…

Quelle: Jotunheim: Outsized Tales from the Norse Land of the Giants

Quelle: Mysterious Roundel Older than Stonehenge and the Pyramids Found in Czech Republic